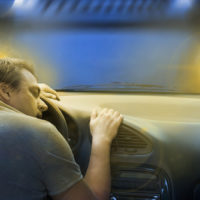 An important transportation spending bill currently before the U.S. House of Representatives would eliminate an important rule aimed at protecting both long-haul drivers from being behind the wheel while fatigued, as well as drivers with whom they share the road.

Federal law limits commercial truck drivers to working 60 hours in a 7-day period, or 70 hours in an 8-day period. Drivers can restart their work weeks by taking a 34-hour restart rest period. Under a law enacted in 2013, drivers were required to take a restart period that included two 1:00 am to 5:00 am periods, to ensure that they received adequate rest. This provision was suspended in 2014, pending the results of a study on whether this provision made drivers safer. In the version of the major transportation spending bill now before the House, this overnight provision would be deleted entirely.

Christopher Hart, the director of the National Transportation Safety Board, has previously cited driver fatigue as a serious safety issue on US roads. Hart called on lawmakers to address this issue earlier in the year, citing the example of the driver in the fatal truck crash which seriously injured Tracy Morgan and killed a friend as a reason driver fatigue needs attention. “Amazingly,” cited Hart, “the driver was in compliance with the applicable rest and duty time rules, yet he had been awake for 28 straight hours before the crash.”

Peter Kurdock, director of regulatory affairs for Advocates for Highway and Auto Safety, agrees that long-haul driver fatigue is not getting the attention it deserves by lawmakers. “It’s no secret that the Tracy Morgan crash unfortunately highlighted an issue we’ve known for years in the safety community. Driver fatigue is a real problem in the trucking industry. Rolling back hours of service is simply going to exacerbate a problem that everyone is aware of.”

Certain members of congressional leadership also take issue with the bill. “Pushing truckers to the point of exhaustion puts them and others on the road at risk. It is our job as lawmakers to ensure appropriate guidelines are in place to protect these drivers and the individuals and families traveling on our nation’s highways,” stated New Jersey Sen. Cory Booker.

It is significant that these changes to the law are being made in a spending bill, rather than in a bill that exclusively addresses legislation regarding commercial long-haul drivers. Changing the rule through an addendum to a spending bill helps lawmakers avoid holding a public hearing on the topic, which would draw attention to the issue of roadway safety as it relates to truck driver fatigue. Kurdock noted, “[t]hey never get a hearing in front of Congress; they’re tucked into these things to avoid public scrutiny.”

If you have been injured in a collision with a large truck or tractor-trailer in New Jersey, ensure that you get the damages you deserve for your injuries by contacting the skilled and compassionate Wayne personal injury attorneys at Massood Law Group for a consultation on your claims, at 973-696-1900.