What to do after a truck accident 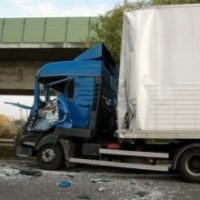 Large trucks, tractor-trailers, and semi-trucks hold the potential to do a great deal of damage when involved in a collision. Most accidents involving a large truck result in injuries not to the driver of the truck, but to the driver of the other vehicle involved. Between 2013 and 2014, the rate of injury accidents where large trucks were involved rose by a stark 17%, according to the National Highway Traffic Safety Administration (NHTSA). 111,000 people total were injured in truck accidents, with 17,000 truck occupants injured in multiple-vehicle collisions, and 82,000 occupants of other vehicles injured in these collisions. Large trucks accounted for 8% of all vehicles involved in fatal crashes, resulting in 3,903 fatalities in 2014. Among all those fatally injured in a truck crash, 73% were occupants of other vehicles.

If you’re involved in a crash with a tractor-trailer or 18-wheeler in New Jersey which was the result of the other driver’s negligence, be sure to take the following steps to preserve your right to compensation for your injuries.

If you’ve been injured in an accident with a semi-truck, tractor-trailer, or 18-wheeler in New Jersey, contact the knowledgeable, experienced, and compassionate Wayne truck accident attorneys at Massood Law Group for a consultation on your case, at 973-696-1900.